Okay, so I've been doing a lot of baking with the almond flour over the last two weeks or so. And in general I'm really pleased with it. Does it taste like wheat? Not really. Is it pretty yummy anyway? Definitely. I've made bread, muffins, biscuits, and cookies and everything has come out more than satisfactorily. At this point, all errors lie with me.

That being said, I took another pass at the light white bread recipe found in Healing Foods. This bread is supposed to light in color and moist. I substituted some banana flour for some of the almond flour in my first attempt at this recipe. That experiment yielded a surprisingly dense bread but one that was super with butter and jam - my favorite way to eat bread. This time I executed the recipe as written. I won't reproduce the recipe for you here. You'll have to buy the book for that. But behold! Light White Bread. 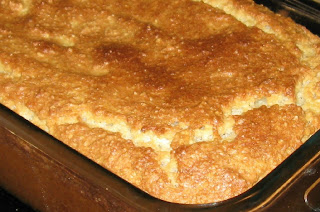 This version of the bread came out golden and beautiful. It was light and moist. Tastewise it would have made excellent sandwiches although the bread is very fragile. It breaks easily, I expect due to the whipped egg whites that are called for in the recipe to give it it's lightness of texture. As before, I've consumed the entire loaf with butter and jam. It's one of my favorite things.

Will I be making this again? Oh, yeah!
Posted by Christy at 2:32 PM

Hi,
it's my first time on this site and i was looking for this recipe but can't seem to find it, could you help?

The recipe for the Light White Bread can be found in the book Healing Foods by Sandra Ramacher. Since I made this recipe verbatim from the book you'll have to check it out at the official source.

Where to Buy SCD Supplies